According to the Native American belief, all birds and other animals are power or medicine animals, and are messengers from the Great Spirit has long been an element of shamanism. Cardinal medicine symbolizes relationships, courtship and monogamy in Native American lore.

Cardinal birds have magical abilities and are able to empower humans with the traits and characteristics of themselves. These animal guides may cross your path, gaining your attention, or they may appear to you in dreams. They act as guides, teachers or protectors as they impart power, wisdom or virtue to the chosen person. Hope each of you will be a chosen one in 2015. 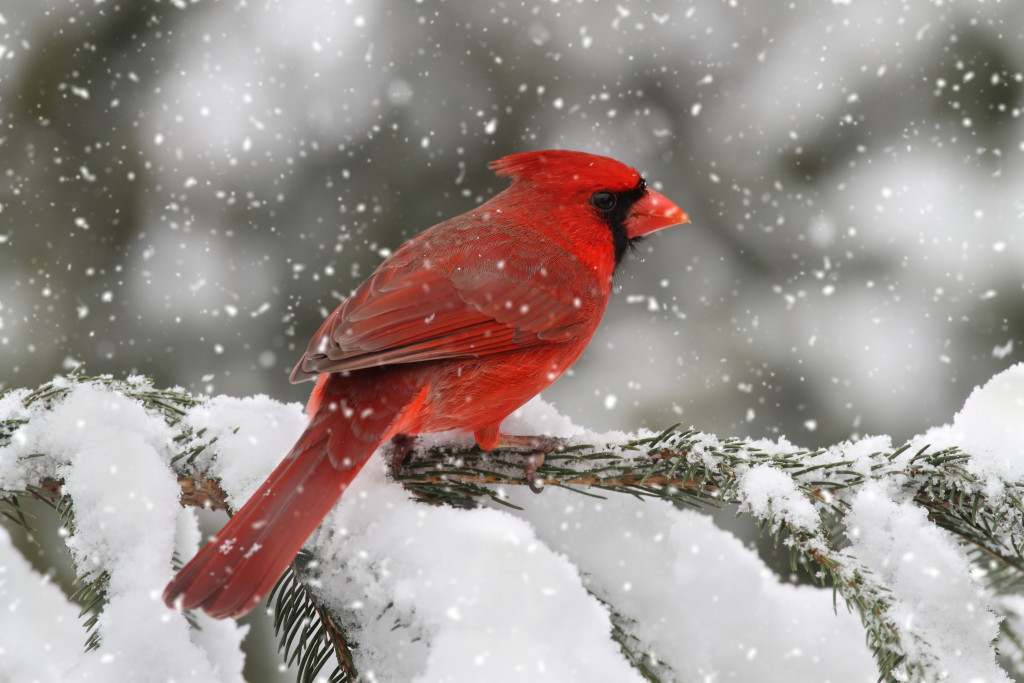 The number 12 is considered a lucky number by many Native Americans. The number 12 also is associated with the cardinal. Cardinals are seen during all 12 months of the year. A cardinal’s nest often contains 12 eggs. Native American lore holds that if you have encountered a cardinal, expect good luck to follow, possibly in 12 hours, 12 days, or at noon or midnight.

Cardinals are monogamous birds whose relationships with their spouses are harmonious, romantic and musical. The male and female sing duets, calling similar songs to each other. Native American lore says if a cardinal crosses your path or attracts your attention, and you’re single, there may be a romantic relationship in your near future. If you’re already in a relationship, you may experience renewed romance and courtship. If you or your partner have been unfaithful, monogamy is the cardinal’s message.

It is illegal to own a Cardinal as a pet or to kill one; they are a government-protected wild bird species and protected pursuant to the “Migratory Bird Treaty Act of 1918.”

The Cardinal’s lifespan can be up to fifteen years!

Only a few female North American songbirds sing, but the female Northern Cardinal does, and often while sitting on the nest. This may give the male information about when to bring food to the nest. A mated pair shares song phrases, but the female may sing a longer and slightly more complex song than the male.

Many people are perplexed each spring by the sight of a cardinal attacking its reflection in a window, car mirror, or shiny bumper. Both males and females do this, and most often in spring and early summer when they are obsessed with defending their territory against any intruders. Birds may spend hours fighting these intruders without giving up. A few weeks later, as levels of aggressive hormones subside, these attacks should end.

The male cardinal fiercely defends its breeding territory from other males. When a male sees its reflection in glass surfaces, it frequently will spend hours fighting the imaginary intruder.

Facts via PawNation, The Cardinal Experience and All About Birds.